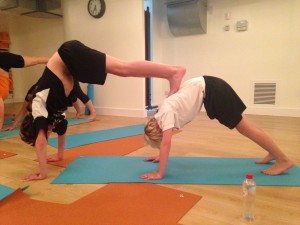 Yoga originates from India and dates back thousands of years. The name ‘Yoga’ is a sanskrit word (an ancient Indo-European language used in Hindu, Buddhist and Jain texts) meaning to ‘yoke’ or unite the mind, body and spirit.

There are many different forms of yoga but the one that we practice at Yoga4Teenagers is an ancient form of exercise which focuses on strength, flexibility and breathing to improve physical and mental wellbeing.

When we practice yoga we go through a series of specific poses while controlling our breathing. There are many different types of physical yoga – there are no rules, teachers will follow one kind or maybe incorporate different ones into their classes or sessions as they will often prefer to call them.

Early yoga focused mainly on seated postures for meditation, as it developed people who practised yoga – yogis – added more active poses which were often based on the movements and postures of animals and objects in nature – which is why so many of the poses are named after animals.

Yoga has endless benefits. It improves flexibility, strength, balance, and stamina. In addition, many people who practice yoga say that it reduces anxiety and stress, improves mental clarity, and even helps them sleep better.

Yoga is never competitive – you cannot be good or bad at yoga; but you can always benefit from it.

If you start to look you will find that many people; some who you least expect, practice yoga – including the English rugby team and most premier football teams. Ryan Giggs famously puts the fact that he was the eldest player in the premiership down to his yoga practice. Watch Ryan Giggs – True Red (Yoga). Many well known singers practice yoga; it helps their stamina during live performances – have a goggle – you will be surprised. Also have a look at our THINGS WE LOVE PAGE

It is also beneficial to people who need healing – many doctors recommend yoga as preventative medicine. It really is available to everyone and good for everyone – think how beneficial it could be to an older person who moves very little – just a few gentle movements may awaken their muscles.

Dress comfortably for your first yoga session in clothing that allows you to move your body fully. Stretchy shorts or leggings and a T-shirt or vest are best. Yoga is practiced barefoot, so you don’t need to worry about special shoes – on a mat.